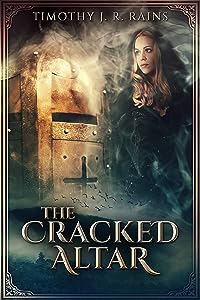 A MISSING PRINCESS. A CITY UNDER SIEGE. A COMPENDIUM OF THE BLACKEST SORCERY. The Grand Mage of Caragol is the most dangerous man in the realm, so when Kerstin steals his spellbook right out of his tower, she lights up a firestorm of trouble. An army sweeps through the city of Klomm—led by Count Olgris, back from the dead. But countless lives are a petty sum for such a great deal of power; with the spellbook, Kerstin can deal with Olgris and the unspeakable horrors conjured by the Grand Mage… Though she’s dancing on a spider’s thread.On the other side of the kingdom, fifteen-year-old Hinkle walks a tight-rope of her own, spinning a web of dangerous lies around her new master, Sir Gilkrist of Lothellae. But when Sir Gilkrist’s quest for the king’s sister takes them to Klomm, she discovers the secrets she’s been hiding are darker than she ever imagined. Worse, she unearths a diabolical scheme that threatens to engulf the world in shadow and blood—and it has everything to do with her Aunt Kerstin.Meanwhile, Sir Gilkrist is growing suspicious of his servant-girl. If he learns the truth, will he overlook Hinkle’s offences and help her? Or will her master devise a dark purpose of his own?