The Journal of Tom Whills: A Time Travel Fantasy for STAR WARS fans 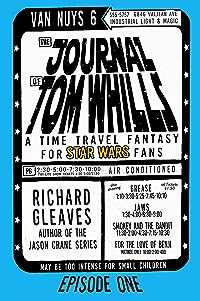 “They were in the wrong place at the wrong time. Naturally they fucked it all up.”--Princess Vespa of Aquilae, senatorTOM WHILLS is a first generation STAR WARS fan and proud of it.So when he and his best friend Danny build a time machine,their one wish is for a glimpse of the original production.But in 1975, Tom's infiltration of an early ILM production meetingsets the entire history of STAR WARS on a disastrous course.In five episodes, the Journal of Tom Whills tells the story ofa STAR WARS production gone off the rails as time traveling fanstry desperately to get their beloved film back on track.Will they succeed in saving the production? Or will STAR WARSgo down as the legendary flop that ruined George Lucas' career?Episode One of a 5-episode seriesEPISODE ONE: DOOM7EPISODE TWO: INFILTRATIONEPISODE THREE: TUNISIAEPISODE FOUR: LONDONEPISODE FIVE: THEY DO IN STAR WARS