The Cult of New Canaan: An Amari Johnston Novel, Volume 2 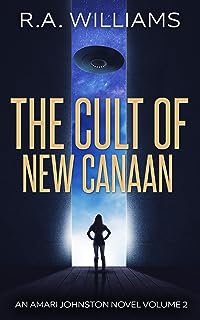 A UFO cult tries to steal the Shroud of Turin in a preposterous scheme to gain eternal life. Amari Johnston is a feisty private investigator fresh out of college. In 1988, she made the national news after debunking the carbon dating performed on the Shroud of Turin. Her boyfriend, Dr. Kevin Brenner, is a brilliant young physicist with his own theories as to why the carbon dating is wrong. One year later, they find themselves in a dangerous situation, one that could land them in the headlines again—and the obituary section as well. A devout Christian named Ernesto Galliano shares Amari and Kevin’s passion for proving the Shroud is the authentic burial cloth of Christ. As sole heir to his father’s vast fortune, Ernesto is determined to use his inheritance for good. He hires Amari and Kevin to join his own personal A-Team, an organization he formed to right the world’s wrongs, one mission at a time. At first reluctant to join this team, Amari’s father, veteran homicide detective, Pete Johnston, finally agrees to take the job so he can protect his daughter from harm. Amari’s bizarre first mission comes after a UFO cult attempts to steal not only the Shroud of Turin but also the Sudarium of Oviedo. However, in a surprising twist of fate, she and Kevin find themselves captured by the very cult they pursue. Desperate to save Kevin and his daughter, Pete unravels clues previously discovered by Amari in a frantic attempt to rescue them before they fall victim to the cult leader’s suicidal vision. Although this novel is Volume 2 in the Amari Johnston series, it can easily be read as a standalone title.