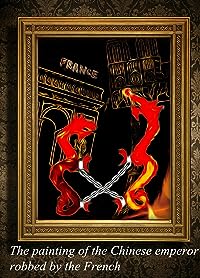 What happened in the past, historians call it history, but for the litterateur it is a true story."The Kangxi Emperor's Southern Inspection Tour", is a painting that is preserved in the world-renowned museums but are not widely known. This book will solve the mystery, and tell you a century-old irritant between Chinese and westerners around this great classical artwork. Although the use of words and grammar of this book is very simple, but the contents will bring unexpected surprises to the historians,artists, collectors, dramatist and peace-loving peoples of various countries.In 1900, part of The Kangxi Emperor's Southern Inspection Tour was looted by the French troop, then scattered over Europe and was cut into pieces by the French.Till Today , who cares about its sufferings?! Two chained dragons bound with chains in the cover image , symbolize "The Kangxi Emperor's Southern Inspection Tour". They are burnt red with the flames and are struggling with howling. What they want is the REAL treated with respect by the world.ContentsPreface  1 A painting leads to the truth of the looting of the French troop 100 years ago 2 Documentary photography left by the Japanese war Correspondent 3 A French general who get rich by the war-robbing 4 The French Government - A plunder shareholder 5 The cut paintings 6 About the Chinese expedition - Victor Hugo’s letter