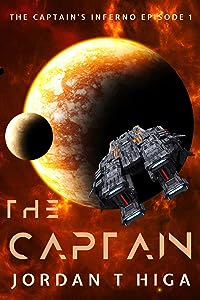 ***Get the second episode free when you download The Captain today, details inside***The only starships that come are the ones to take people away…Except for one.Cut off from the nets, hunted, and betrayed, quantum hacker Denis Richards is only too happy to accept the strange job offer that promises him a way off Earth, and a place on the crew of a small starship operating on the edge of the third horizon. The fact that the ship is based on Rocquamport, a desert colony that doesn’t even have a Charter from the United Planets Congress, suits him even better.However, when he arrives, the rough, drunken Captain who greets him is very different from the suave, polished, young woman who interviewed him, and his place on the crew is much more dangerous than he was led to believe. Because the Captain has enemies, and her ship is much more than a simple trader. But none of that will matter if Den can’t even survive his first week with the Captain…The Captain is the first episode in Jordan T. Higa's Series The Captain's Inferno, a swashbuckling, sci-fi, space opera adventure. If you like Star Wars, The Expanse, or the Marvel Universe then you'll love this cyberpunk series which captures all their best traits in a fast-paced, captivating, intergalactic adventure.Download the first episode to meet the Captain today!