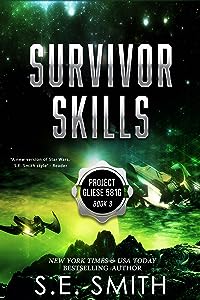 Two warriors—one mission: Survival….Sergi Lazaroff is a weapons expert and a spy for the Russian FSB. Assigned to the Project Gliese 581g exploration team as a mission specialist, his job was supposed to be simple—learn all he could about the man-made object in space that no one from Earth made, and return home to convey that valuable information to the FSB. When he wakes up on an alien planet in an escape pod, Sergi knows the last part of his mission will be impossible. Instead, he’ll have to use every trick he has to survive in a world where he doesn’t know the rules.La’Rue Gant has landed on a planet belonging entirely to assassins for one reason only: one of the mysterious pods that everyone is looking for landed here. It’s worth a lot of credits, and she currently needs credits so desperately that she’ll even take them from the Director of the Legion himself: Andronikos. In the meantime, she’s trying very hard not to think about how many lives Andronikos has destroyed in this ridiculous war, or why he’s so interested in someone bringing him these pods, because she needs to collect this bounty! The pod itself was surprisingly not difficult to find, but actually getting it to her ship when the competition and the previous occupant of the pod are larking about… is proving a bit difficult…really, really difficult. The hunter becomes hunted, and nothing is turning out like La’Rue thought it would…. Caught in the middle of an alien civil war, two fighters from vastly different backgrounds must come together to fight for the survival of the Knights of the Gallant Order as the Legion forces close in around them. Can they slip through the traps set up to snare them, or will the Legion Director finally capture not one, but two of the prophesied ancient Knights of the Gallant Order?Internationally acclaimed, New York Times and USA TODAY Bestselling author of Science Fiction, Urban Fantasy, and Paranormal Romance, S.E. Smith, brings another action, adventure, and suspense-filled story to transport readers out of this world!