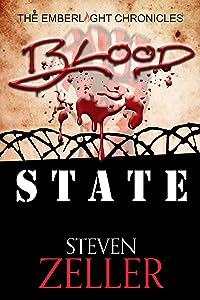 What if the government has rewritten history to hide a reality too dark and twisted for its citizens to comprehend? Jonathan Keechi is a loyal citizen of the all-powerful State, enjoying his second year of University in Oregon Zone. The untamed, independent fire that burns inside of Jonathan is an inspiration to his friends and sets him apart from his fellow citizens. However, Jonathan’s innate curiosity leads him to a truth that he may soon wish he had never uncovered. Follow Jonathan as he leads his friends on a high-octane adventure, fleeing the safety and security of the totalitarian State only to find himself in the middle of a maniacal plot to resurrect the American Republic of the Founding Fathers. As they find themselves thrown headlong into an epic conflict, Jonathan and his friends begin to question everything they once believed in a dangerous new land of liberty.The Emberlight ChroniclesBook 1: Blood StateBook 2: Blood Wars