History of the Later Roman Empire 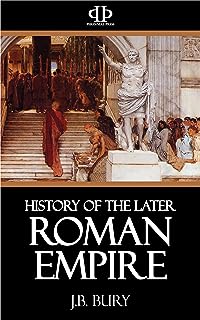 THE first of these two volumes might be entitled the “German Conquest of Western Europe,” and the second the “Age of Justinian.” The first covers more than one hundred and twenty years, the second somewhat less than fifty. This disparity is a striking illustration of the fact that perspective and proportion are unavoidably lost in an attempt to tell the story of any considerable period of ancient or early medieval history as fully as our sources allow. Perspective can be preserved only in an outline. The fifth century was one of the most critical periods in the history of Europe. It was crammed with events of great moment, and the changes which it witnessed transformed Europe more radically than any set of political events that have happened since. At that time hundreds of people were writing abundantly on all kinds of subjects, and many of their writings have survived; but among these there is no history of contemporary events, and the story has had to be pieced together from fragments, jejune chronicles, incidental references in poets, rhetoricians, and theologians. Inscribed stones which supply so much information for the first four centuries of the Roman Empire are rare. Nowhere, since the time of Alexander the Great, do we feel so strongly that the meagreness of the sources flouts the magnitude of the events.             Although we know little of the details of the process by which the western provinces of the Empire became German kingdoms, one fact stands out. The change of masters was not the result of anything that could be called a cataclysm. The German peoples, who were much fewer in numbers than is often imagined, at first settled in the provinces as dependents, and a change which meant virtually conquest was disguised for a shorter or longer time by their recognition of the nominal rights of the Emperor. Britain, of which we know less than of any other part of the Empire at this period, seems to have been the only exception to this rule. The consequence was that the immense revolution was accomplished with far less violence and upheaval than might have been expected. This is the leading fact which it is the chief duty of the historian to make clear.