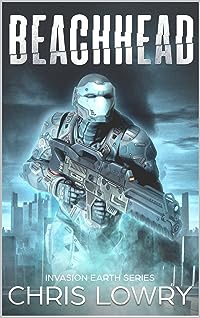 They made their final stand on Mars and lost.Now the aliens are coming. They want to occupy earth. They want to destroy humanity. They want to kill every last one of us.But we are legion. Seven billion humans are tough to kill. Pockets of survivors band together to fight back. It's hard to know who to trust. Human collaborates will do anything to live one more do.The US mounts an offensive. They turn loose Lt William "Don't ever call me the Kid" Bonney and his eight headhunters to wreak havoc on the invaders. Their business is killing Licks and brother, business is good.But the Lick Commander has a plan. More betrayal. When Bonney and his squad raid a supply train on the orders of High Command, they rescue a prisoner with a secret. One that will change the tide of war and help the human cause win. If they can last long enough to reach it.Book One in the Invasion Series is an extension of the world built in PHALANX and PHYRRIC. Fans of dystopian military sci fi are going to love the adventures of Lt and his squad of misfits as they roam middle America siccing the dogs of war on alien invaders bent on colonizing earth.WARNING: This book contains graphic language. There are enough F bombs in here to make sailors blush, so if you are faint of heart, do not read further. But if you can handle a little spice in your reading pleasure, then grab your copy and join the fight today.