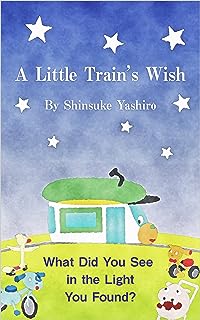 What Did You See in the Light You Found?--- Introduction ---In the night of heavy mist, a small train Toleram decided to looking for a shooting star with his friends, Kick-board, Bicycle, and Tricycle on board toward the station on the top of hill.Storybook of Toleram and his friends in mysterious, but heartwarming moment.--- About the Author ---Shinsuke YashiroBorn on July 20th 1985Character designer, story writer from Kanagawa, JapanAfter graduated from Nihon University College of Art, he founded “Yashir-O-gram“ which focuses on creating original character designs and products.He collaborated with many producers from animation, games, character design industry, and was engaged in launch of entertainment projects.Published the first book of the series "Little Train TOLERAM: Toleram’s Birthday" from "Little Train Toleram."