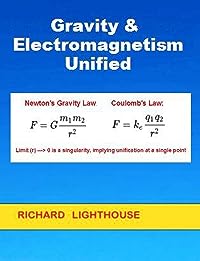 Rev-1F. No one has ever provided mathematical evidence that unifies gravity and electromagnetism. This is an Important Mathematical Discovery. Note that the 2 classical equations of Newton's Gravity and Coulomb's Law have a similar form. Also note that when Limit (r) ---> 0, these 2 equations approach a singularityThis implies that our universe collapses to a single point for unification. Each reader must comprehend that our universe literally blinks, off and on, 1.1 trillion cycles each second (1.1 THz). See my related articles, including the blinking universe calculation and 1024-QAM for elementary particles. There are 3 mathematical approaches and 3 empirical sources that all conclude the same idea - our universe is blinking. As Einstein once said, "Reality is merely an illusion..." - A blinking universe would certainly make his statement correct.There is also an important mathematical distinction here. Note that I did not say these equations become infinite, nor did I state that division by zero is occurring. The 2 equations approach a limit, such that the difference between them becomes trivial. They become unified as they get closer to the singularity. Consider that the smallest distance that can be measured using current technology is about 10^-19 meters. Planck scale is about 10^-35 meters. Now consider these 2 equations at 10^ -10,000. The difference between them becomes trivial. And which equation approaches the singularity faster is immaterial. The definition for unification according to Merriam-Webster's dictionary is: the act, process, or result of unifying : the state of being unified.Clearly, this process is happening for these 2 equations as r approaches zero.Some have criticized the issue of positive or negative charge. However, in a blinking universe, the charge value does not matter because everything collapses to a single point. Or stated another way, the energy of positive and negative charges are simultaneously held at a single point. If you insist on this being an issue, then you will at least agree, when the charge is positive – unification can occur. This is still an important mathematical first. RLighthouse.com #BlinkingUniverse