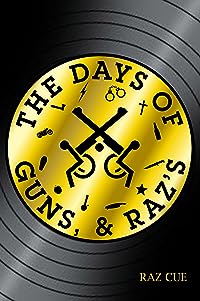 In the year of our Lord, nineteen hundred and eighty-five, a little ol’ band called Guns N’ Roses formed in Raz Cue’s living room. And thus, Cue became the band’s first manager... to be fired. With absolutely no hard feelings, Mr. Cue remained a trusted member of G N’ R’s inner circle for the remainder of the decade, allowing him to witness the iconic band tour the world’s stages as they rose to the pinnacle of rock ‘n’ roll. When the Guns N’ Roses party quit being fun for him, Cue stepped away from the swelling ranks of backstage hangers-on so that he might fully enjoy the band’s incendiary performances from a fan-in-the-audience perspective.With good times and fun stories constantly swirling about in his mind’s eye, a few years back, Mr. Cue resolved to set the standard for which all future memoirs should be judged. Four hundred and twenty drafts later, the product of that quest emerged: The Days of Guns, and Raz’s. Far more than a Hollywood rock ‘n’ roll memoir, the book follows Cue’s drug-addled journey from feral child to moral-ish adult. His spinal injury during high school and lifetime of riding a wheelchair, while higher than the International Space Station, are thrown in to keep it all rolling along.Mr. Cue manages to wrap up the whole shebang neatly within the changing landscapes of 1970s through 90s America, all the while showcasing his lifelong love of music and cheap thrills. With an undying admiration for hungry up-and-coming artists, Cue remained involved in the Los Angeles music scene through the mid-90s implosion of the Sunset Strip, so he wedges in a bit of name-dropping from that period, too. If you’ve longed for a caustic, satirical, blue-collar rock bio that delivers a stinging bitch slap to our current insanity-level political correctness, this one’s for you!