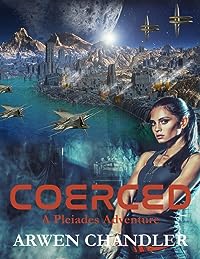 “You think the Admiral will come looking for us?”“I’m certain of it.” Adrik removed the wrist band from around his wrist and placed it on the picnic table. “We’re going to be blind for a bit.”Gwyn reached into her bag and retrieved a small black box. She placed it in his hand. “Put it against your wristband. It’ll reformat the tracers, so it can’t be tracked.”Adrik followed her directions. The box turned green as he passed it over the band. “It’s good and completely untraceable. You can put it back on.”Adrik secured it back in place. “Your tech is pretty sweet, Gwyn.”She smiled. “I know a guy.”Smuggling is lucrative, but life-threatening when the solar system’s reigning military organization hires Gwyn Casteliano for an illegal and dangerous operation.Gwyndalaria Casteliano, the best starship pilot and smuggler in the quadrant, is apprehensive when summoned to Raygus Prime, by the head of the Militarian. But, how can you tell him no, when he holds those you love in his powerful hands?Accompanied by Lieutenant Commander Adrik, she fights her way across the system, chased by bounty hunters. What’s a girl to do when she falls for the Militarian man she is accused of kidnapping? Gwyn has a plan.