Lebron James: The G.O.A.T: The Story Of One Of The Greatest Basketball Players Of All Time 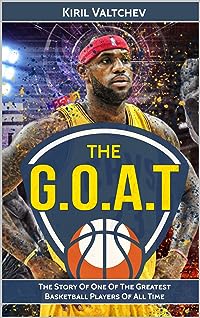 Read the Incredible Story of One of the best Basketball Players of All Time This unauthorized biography of Lebron James's basketball career journey into what makes him one of the best to ever play the game. He is widely regarded as one of the biggest sports icons in the world and his name is recognized by almost any sports enthusiasts. From his unbelievable god given athletic ability, to his sportsmanship, character and leadership, Lebron is the type of player most dream to be. A preview of what you will read. ___________________________________________________________________* High School Journey ( Freshman through Senior Year )* Stats of all his high school games* Detailed info about his NBA Career, winning his first, second and third ring* Endorsements and Earnings* Off The Court* Pictures of Lebron_____________________________________________________________________An excerpt from the book:With the first pick in the 2003 NBA draft the Cleveland Cavaliers select Lebron James. Cleveland fans would never forget those words. There was much speculation whether or not Lebron would be the first pick in the NBA draft. Lebron was happy to stay home and play for his hometown team. His main focus would be to turn the Cleveland franchise around and take them to the NBA finals. It would be the start of an era that would ignite the Quicken Loans arena for decades to come.The endorsements, fans and critics came pouring in his first season with the Cavs. In his very first game against the Sacramento Kings, Lebron scored 25 points and set a NBA record for the most points scored by debut player. He was absolutely explosive in his first game. The crowd loved to watch him because he played the game with a tenacity and desire to win. Lebron went on to average 20.9 points, 5.5 rebounds, and 5.9 assists per game in his first season with the Cavaliers. He had a season high of 41 points on 3/27/2004 against the New Jersey Nets and it showed everyone that the kid from Akron was here to stay and make his mark on the game. It was no question that Lebron had talent, but would he be able to turn the Cavaliers around? The Cavs ended the season with a record of 35-47 and failed to make the playoffs. Even though they failed to make the playoffs, with Lebron on the roster, they had a massive 18 game improvement from the previous year. It became apparent that he was there to improve the dynamic of the team and push everyone around him to perform better.