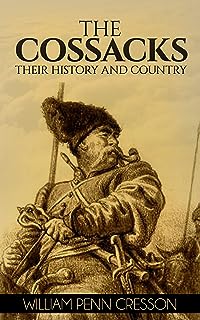 Cossacks are a group of predominantly East Slavic-speaking people who became known as members of democratic, self-governing, semi-military communities, predominantly located in Ukraine and in Russia. They inhabited sparsely populated areas and islands in the lower Dnieper, Don, Terek, and Ural river basins and played an important role in the historical and cultural development of both Russia and Ukraine. By the end of the 18th century, Cossack nations had been transformed into a special military estate (Sosloviye), "a military class," similar to the knights of medieval Europe in feudal times.In The Cossacks, William Penn Cresson traces the history and culture of these legendary Slavic warriors.