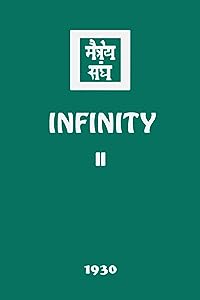 Infinity II is the sixth book from the Agni Yoga Series which is composed of fourteen books. In them is found a synthesis of ancient Eastern beliefs and modern Western thought and a bridge between the spiritual and the scientific. Unlike previous yogas, Agni Yoga is a path not of physical disciplines, meditation, or asceticism—but of practice in daily life. It is the yoga of fiery energy, of consciousness, of responsible, directed thought. It teaches that the evolution of the planetary consciousness is a pressing necessity and that, through individual striving, it is an attainable aspiration for mankind. It affirms the existence of the Hierarchy of Light and the center of the Heart as the link with the Hierarchy and with the far-off worlds. Though not systematized in an ordinary sense, Agni Yoga is a Teaching that helps the discerning student to discover moral and spiritual guide-posts by which to learn to govern his or her life and thus contribute to the Common Good. For this reason Agni Yoga has been called a “living ethics.”Agni Yoga Society, Inc., New York