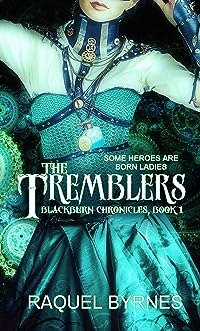 Charlotte Blackburn—Beautiful, intelligent, a gifted tinkerer—lives in a cloistered world of wealth and privilege beneath the Electric Tesla Dome that shields survivors of The Great Calamity. But when her father is abducted, and a strange sickness starts transforming men into vicious monsters, she discovers that technology is no protection at all.Ashton Wells has a dire mission: Secure Colonel Blackburn and deliver his research to The Order of the Sword and Scroll. But the plan goes awry, and he is left with nothing but the colonel's daughter who has a target on her back and is willing stop at nothing to rescue her father—including handing over to the enemy the only means to stop the monstrous plague.Branded as traitors, Ashton and Charlotte brave the treacherous floating sky ports of Outer City to hunt down the elusive inventor who is the only person able to activate the strange device that harbors the secret to their salvation.With the government closing in, a rebellion brewing in the streets, and terrifying Tremblers attacking the innocent, the two must work together to stop their fragile world from crumbling once more into destruction.