Banish My Heart: A Cinderella Story (The Grimm Laws Book 1) 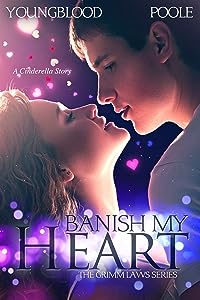 From bestselling authors Youngblood and Poole, comes a clean romance series that's captivating and magical. **NOTE** This book is the revised edition of the first half of the original title Banished published in 2015 by Youngblood and Poole.Fans of the hit TV series Once Upon a Time will love this Cinderella Story where the real world and fairy tale world collide when a fair-haired prince falls in love with a peasant girl. An accident puts Elle Worthington into a coma. When she awakes, she can’t remember her name or anything about her life. She leaves the hospital and returns to a home that’s anything but ideal—her stepmother loathes her, her stepsister resents her, and her father’s a workaholic who’s rarely ever home. She soon discovers she led a charmed life before the accident where she was dating Edward Kingsley, the golden-boy quarterback. Everyone tells her how lucky she is to be with Edward, but for some strange reason, Elle is instead drawn to Rush Porter, her next-door neighbor—a brooding, reckless newcomer who’s too good looking for his own good! From the moment she sees him, he captures her attention and haunts her dreams, and he seems to know an awful lot about her.When Elle goes to work for her eccentric aunt Adele who owns a chocolate shop, she begins to get a glimpse of another life—a magical life in which she was a simple peasant girl whose life changed forever the day she caught the eye of the prince. A girl who might have lived happily ever after had her heart not had other ideas. She becomes trapped between loyalty and duty—betrayal and love, and a forbidden attraction so strong that it has the power to destroy her.All is not as it seems on the surface. Dark forces are watching and waiting to claim what they deem to be theirs, and the fate of a kingdom rests in the hands of a girl who cannot remember who she is or where she came from.Includes bonus chapters of:The Magic in Me (Book 2 of The Grimm Laws Series) by Jennifer Youngblood & Sandra Poole The Neighbor's Secret (A Secret Billionaire Romance) by Kimberley MontpetitRescue My Heart by Taylor HartBooks now available in the Grimm Laws Series:Banish My HeartThe Magic in MeUnder Your SpellA Love So True