The Candidate in the Rye: A Parody of The Catcher in the Rye starring Donald J. Trump 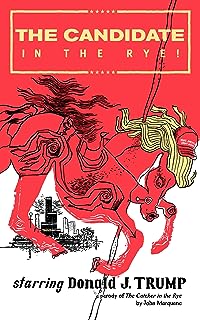 "If you really want to hear about me running for president, the first thing you'll probably want to know is what country I was born in, and what my experience holding political office is like, and what my tax returns say, and all that Mitt Romney kind of crap, but I don't feel like talking about any of that, if you want to know the truth. And if I'm being honest -- I'm the best at the truth. I really am.” -The Candidate in the Rye One day not too long ago, John Marquane, a one-time writer for the Harvard Lampoon, noticed that The Catcher in the Rye was in fact written in the voice of Donald J. Trump. With just weeks before the November 2016 election, Marquane got to work. The Candidate in the Rye parodies J. D. Salinger's controversial and often-banned masterpiece, reimagining it through the eyes of the Republican Nominee as he lags in those dirty, terrible polls with three days to go before the election. Follow America's least phony candidate as he runs away from his running mate, Pencey, puts on one of literature's greatest symbols -- his red Make America Great Again hat -- and embarks on an aimless quest to figure out just what the hell's the point of all this political crap, anyway. Will Trump blow it? Will the United States elect a president whose problems most closely resemble those of a fictional sixteen year-old? Will he, like Holden Caulfield with his sister Phoebe, find solace in watching his daughter Ivanka ride round and round on the carousel in Central Park, which, and you can look this up, is in fact now run by Donald J. Trump? Will the angstiest man in America finally face his own demons, and maybe even his ex-wives? The Candidate in the Rye is available online both as a Kindle ebook and paperback, both with themes and meaning included. And don't forget to check out another new parody by Marquane: a send-up of Harry Potter and the Cursed Child titled Harold Patter and the Worst Child.