Seven For The Slab: A Horror Portmanteau 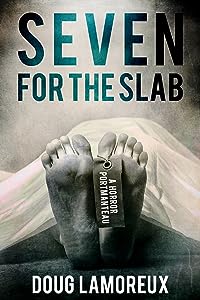 It's nearly midnight, and a curious snoop finds his neighbors dead. He gathers his wits and calls emergency services. Despite a torrential thunderstorm, Sheriff's deputies, the Fire Department, and an ambulance all respond quickly.But there's little they can do. The victims are not only dead, they are long dead. The snoop invites the emergency workers into his garage, out of the rain, to await the arrival of the coroner and, thereafter, the funeral home staff who will take his neighbors away.The lightning flashes. The thunder rolls. The setting inspires the police, firefighters, and paramedics to pass the time by telling stories, both thrilling and chilling... and you are invited to join them.Award-winning horror writer Doug Lamoreux spins seven short, eerie tales of terror and mystery into one bewitching brew. To borrow from the traditional Scottish poem: 'From ghoulies and ghosties, And long-leggedy beasties, And things that go bump in the night, Good Lord, deliver us!'