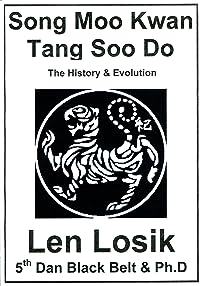 Song Moo Kwan Tang Soo Do explains the creation, history and evolution of the first Korean martial arts Kwan opened just as World War II was ending and its founder. The Song Moo Kwan was the first Kwan named after the Japanese Shotokan style that is named for the pine trees that surrond Mt. Songshan in China, the home of the first Shaolin Temple whose monks trained daily in Kwon Bup (Kor., Chuan Fa Chinese.) as preventive medicine program developed and spread by the Buddhist monks. Buddhism was brought to China from India using the Silk Road and adopted throughout Asia by the Buddhist's Shaolin Temple where for the Buddhist's emphasis on physical and mental health improvements, preventive medicine, medical surgeries and pharmaceutical treatments that were unknown in China at the time and so Buddhism and Kwon Bup swept through the Asian countries providing relief to the old, weak, injured and ill. The author describes the relationship between Song Moo Kwan Kong Soo Do, Song Moo Kwan Tang Soo Do and the Sang Moo Kwan Tae Kwon Do and the support the Byung Jik Ro and the Song Moo Kwan provided to the Korean government in its desire to create a national martial art and an Olympic sport. The author also includes a discussion on Song Moo Kwan's influence on recent 21th century Korean martial arts styles of Tang Soo Do, Kong Soo Do and Tae Kwon Do and defines the many other Korean Kwans that existed and how they resisted and then was convinced by the Grandmaster Byung Jik Ro of the Song Moo Kwan to willingly participate in the Korean governments desire to develop a Korean national martial art and an Olympic sport. The author Includes several lists of the Hyungs taught in Song Moo Kwan Kong Soo Do, Tang Soo Do and Tae Kwon Do, a list of both the Hyungs and Poomsae taught in Song Moo Kwan Tae Kwon Do, the symbol used for each Hyung and the desired trait that is developed by learning each of the Hyungs, a definition, origin and description for each Hyung, Kata and Poomsae the Song Moo Kwan used over its many decades of existance, a Song Moo Kwan-Korean to English terminology, dojang conduct, color belt promotional requirements, a substantial 80+ item bibliography, a full glossary and extensive index for the readers convenience.