Empire of the Fallen (The Art of War Trilogy Book 3) 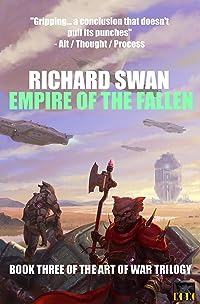 The Kaygryn Empire is coming. Amidst the embers of the Ascendancy War, old enmities must be forgotten and new alliances forged if the UN is to rally against the Imperial Fleet of Reclamation. Yet even on the eve of battle, the beleaguered forces of Tier Three are far from prepared. Power-hungry politicians, duplicitous generals and terrorists from all races threaten to destroy the fragile new alliance.In the face of annihilation, one last throw of the dice: a suicide mission deep into Andromeda, to the heart of the Kaygryn Empire.Its only objective: to stop the invasion at all costs...