Prophet of the Godseed: A Novel of Time Dilation and Singularity (Deep Time Book 1) 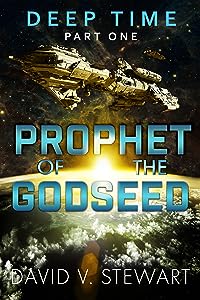 When you travel between worlds, time slows. In the depths of deep time, travelers become ancient. They become gods.Alone, Padalmo walks through the eternally sunlit desert of Terranostra. He prays for the return of the Seeders, the race of gods who instilled all worlds with life, and that they would make him into their prophet. Above, Malcolm Macbeth watches a world that has changed radically in the 2000 years since he seeded it with human life; a world which now walks the razor edge between two kinds of annihilation: nuclear war and cognitive singularity. As war breaks out and the fate of the world races toward a grim conclusion, the Clan Macbeth must find a way to save the world - if it is worth saving at all. Moses, an refugee from Earth's ancient singularity may hold the key in his union with technology, but can the clan make use of him in time?