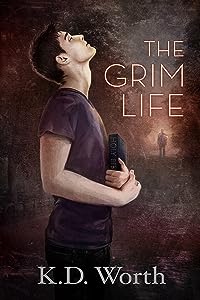 The Grim Life: Book OneMax Shaw is dead.Well, sort of.After dying on prom night, Max was recruited by a mysterious tattooed angel named Slade to join a group of teenage reapers. Cocky and sarcastic, Max thinks he has his afterlife together, but the moment Slade assigns him to his first suicide case, everything changes.Christian college student Kody Michaels is struggling to make sense of his life and his faith. After a failed suicide attempt at an antigay camp, Kody is determined not to fail again. Tired of disappointing his family and God, he is going to end his life once and for all.But in a split-second decision, Max saves Kody—defying the rules of a reaper.Max believes his only concern is convincing Kody that God loves him just the way he is, so he can save him from a hellish afterlife as a shade. Little does Max know, some shades have found a way to walk among the living as wraiths. These evil wraiths know Kody has been slated for death, and they have another, darker purpose for him.Max has only one night to save Kody before one of Slade's team finishes the job Max lacked the courage to complete.