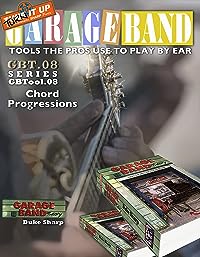 Everything in this book came from Garage Band Theory and there's loads more useful stuff there.

When I first started trying to explain how people can play songs by ear, this is where I began.

I thought that if a player understands that the vast majority of the music we hear is based around about five patterns, which are called chord progressions, and then they learn those patterns they'd be off and running.

Not a bad idea, but what happened is that the student would not really know exactly what a chord is, which has to be explained in the context of a scale... and they wouldn't know what a scale is ... and so on. Turns out this is one of those times that a coherent explanation can't really start in the middle.

But the basic premise is absolutely true. There are only a few chord progressions that can be thought of as the foundation for nearly all the music you'll ever hear, and they're rather simple. And they're all here.

When you learn to recognize chord progressions ... musical patterns ... it becomes quite easy to anticipate the 'next' chord.

When you're doing that, you're playing 'by ear.'

There are plenty of examples and chord diagrams that will let you get right into playing all these tunes and a quiz at the end so you can measure your progress. (use a separate sheet of paper for your answers)

This is non Academic, practical, useful theory for living-room pickers and working musicians who want to be able to think coherently about music in order to ask questions and understand answers about the music they want to play.

The stuff in GBT is about understanding The Beatles and The Rolling Stones,  Cole Porter and Duke Ellington, The Grateful Dead and Vampire Weekend.

It's NOT about analyzing Bach Fugues... but you'll be able to if you want to.

It was written for the 99% of musicians who are NOT music majors by a incorrigible honky-tonk guitar player who plays by ear ... but understands the relevant vocabulary and what's sensible and useful for MOST players.

"Garage Band Theory is a must for any musician." Rodney Crowell

"Don't be put off by this giant book - Duke's got the secrets of the universe in here. Quite simply, this is the most comprehensive book on music theory I've ever seen."
Bill Payne (Little Feat)

"Something for every musician at any level. Especially helpful is the musical notation and tablature for a variety of instruments. This book inspires me to learn and practice more."
Sam Bush

"Garage Band Theory is a veritable encyclopedia of useful tools and tips.This book lifts the lid off the "black box" of music theory and let's the light shine in - and in a fun, practical way.
This is a book which should be left handily lying around the living room, bedside, studio, classroom, (restroom?) - ready to be dipped into at any time for reference purposes or just to improve or refresh one's fluency in the language of music.
A great resource for musicians young and old no matter what your training. For the price of a one-hour lesson, GBT offers a lifetime of learning."
Alasdair Fraser

"Garage Band Theory let me know how little I know... but in a good way.  It's a great book!" Sterling C Ball CEO, Ernie Ball Inc.

"This book is written in the people's key." Kostas

"Garage Band Theory offers you everything you need to know to understand, play and make your own music. Because he is both an accomplished musician and teacher, Sharp's Garage Band Theory is an excellent guide for beginners and more advanced players alike." Sam Barry, author, musician

No matter which instrument you want to play, the advice, inspiration and down-to-earth tips in this book will help you get to your goal.

Garage Band Theory demystifies music theory and, in the process, shows how to apply basic music theory to the art of playing by ear and composition.