Politics on the Playground, Episode One: Trump's Tantrum 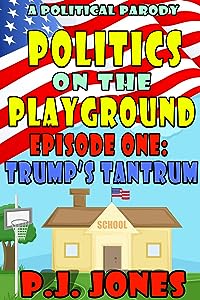 So you just happened upon this book by chance? You loathe The Donald and you want to see him slammed in a parody. Or maybe you are Donald Trump, and you are gathering evidence for your lawsuit against me. Either way, if this is your first PJ Jones book, you should be warned: I’m rude, crude, and crap your pants funny. Depending on the size of the yardstick wedged up your ass, I may also not be funny at all, disgusting, and shameful.

You are about to take a romp through some inane, low-brow prose, where most of your beloved conservative and liberal politicians will be roasted, skewed, and served up with gluten-free wasabi (sorry, Ted Cruz, but we’re fresh out of the gluten kind).
In other words, if you don’t spew coffee through your nose while reading this book, YOU’RE READING IT WRONG!
Sincerely, PJ

What critics are saying about Politics on the Playground
There’s a special spot in hell for writers who parody Hillary Clinton—Madeleine Albright’s neighbor’s cat
If you publish this book, PJ, I swear I’ll turn your house into a parking lot—A lawyer who claims he works for Donald Trump
I think Trump should throw PJ over the wall—An unnamed source who heard it from a friend of a friend of Sean Hannity
This book is a little too gay for me—Someone claiming to be Ted Cruz
Buy this book, and I’ll send you a free used cigar—A flasher in the Safeway parking lot claiming to be Bill Clinton