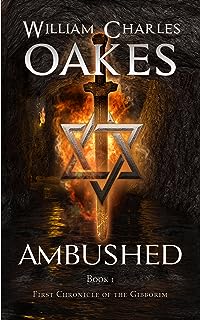 Will the prophecy be fulfilled? Or will deadly enemies thwart the Word of God and murder His chosen one?How will the young Crown Prince become King, as the Prophet proclaimed? How can the mystical and secretive Gibborim Guards safeguard the weak and pampered boy from unknown assassins on every side? Might another boy, the young royal heir to a mighty but subjugated warrior kingdom, take the throne instead... by force?Here is the epic story of the tragic and sorrowful teenage years of Israel's greatest king, Solomon, kept secret for 3,000 years. To fulfill his destiny, Solomon must survive the dangers of a treasonous General, a royal impostor, a secret order of assassins, and a rival kingdom. All while somehow protecting his mother, Queen Bathsheba, and his brothers from their enemies. But first, the young prince must survive an assassination plot ten years in the making. AMBUSHED is the first book in the series entitled the 1st Chronicle of the Gibborim.