The Crucifier: A Thriller (The Meta-Human Series Book 1) 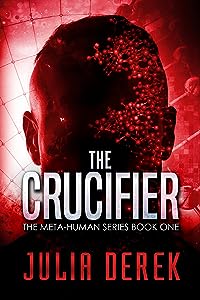 CAN SHE FIND THE KILLER BEFORE THE KILLER FINDS HER?When the FBI assigns the Crucifix Killer case to Special Agent Gabi Longoria and her partner, she's confident; they'll surely catch the sadistic killer within days. After all, they just took down a worldwide conspiracy that has forever changed the earth's population. But the case is not as straightforward as it first seemed. The serial killer's M.O. keeps changing. Are they in fact dealing with two killers? A man and a woman perhaps? Meta-humans? Metas are genetically engineered humans with superior abilities, the remnants of the conspiracy and the reason Gabi became an FBI Agent in the first place.Nothing quite makes sense. And then Gabi gets the distinct feeling that someone is after her. Is the killer planning on making her the next victim?NOTE: FRIENDING THE DEVIL is a stand-alone thriller and is the first book in a spin-off series based on the GIRL UNDERCOVER serial. The second book in the series in now out and is entitled CATCHING THE DEVIL.