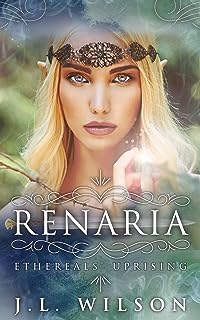 Book 2 in the magical fantasy series, Renaria.Coffee barista. That's what I've become. This is my destiny. Leda frowned at the busted espresso machine as the milk frothed with the vigor of a retired snail.Set in Earth's future, in a time much like our own, a danger lurks from a magical realm... Since their return from Renaria Leda has heard nothing from Caleb nor the other beings of the magical distant planet. Was it a dream? Will she ever see Caleb, the legendary Elf leader, again?With her powers gone she's all but given up hope. That is, until early one morning a mysterious message appears on her communicator. Could it really be a Seon, a long lost friend? Or is a member of the Dark Adepts bent on seeking revenge for foiling their plans to destroy Renaria?Has her father been found? Are they truly the only humans on Earth who know about the planet of Renaria? Or are other magical beings hiding in wait for a war between the strongest forces of the cosmos?