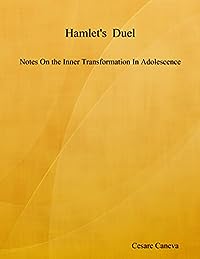 In the countries of the industrialized West is given an elevated value to the material results achieved by the individuals, but it is ignored, on the other hand, the meaning of those successes obtained by carrying out some inner transformations.This study focuses on that particular “ethical” transformation which, once carried out, allows every character to perceive his own existence. The first nucleus of this inner transformation is recognizable in the adolescence.The duel faced by Hamlet in the fifth act becomes the archetype of that negative asymmetrical duel that the young has to face when the "father" doesn't succeed in assuming his own role in the period of his child’s adolescence. The unsuccessful carrying out of the ethical transformation under examination causes the development of more or less serious forms of pathological games, degenerate forms introduced in the sixth chapter and in appendix with some examples.