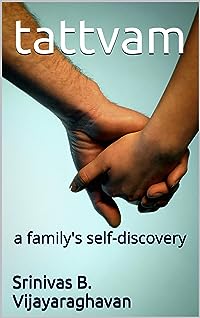 by Srinivas B. Vijayaraghavan

Ramesh and Lakshmi Tattvam raise their two sons in a middle class household in an idyllic Bangalore that is slowly beginning to feel the growth winds of post-liberalization India. As parents, they have high hopes of emotional and financial support from their older overachieving son, Akash while doubting the capabilities of their inscrutable younger son, Prithvi who silent deals with psychological problems that he does not reveal to his parents. Ramesh wants to retire early in order to start his own consulting business and expects that Akash will support the family financially.
Those growth winds soon turn stormy for the Tattvams as they give flight to the aspirations of Akash, who moves to the U.S. to study, much to his parent’s disapproval. In the U.S., he falls in love with and marries a Chinese girl Pei Li, against his parents’ wishes, which completely breaks his relationship with them. Broken and disillusioned with Akash, the Tattvams soldier on with the support of their younger son. Prithvi also finds love in childhood friend and confidant, Vasumita but loses her to marriage, only to rekindle that love after she returns home to a cold welcome after walking out on an abusive husband. Their rekindled relationship faces scrutiny not only from their respective families but also from society.
Prithvi finds strength to overcome his psychological problems to build a career for himself as a technical content writer, while being a pillar of support for his parents and Vasumita, who moves out of her parents ‘home and lives on her own, managing a successful career. Ramesh and Lakshmi find their second winds in a millennial India. Ramesh, an expert in the Electrical industry becomes a world renowned blogger with Prithvi’s help and maintains a blog site called ‘Wisdom Electric’. Lakshmi pursues her singing ambitions and powered by her immense talent, becomes a much sought after lead singer of a traveling classical singing group, ‘The Traveling Lakshmi’s’ and travels the world.
Meanwhile, Akash’s career falters as he watches his wife supersede him on the work front. His early promise fades as he struggles to convert potential into performance. He grows increasingly jealous of Pei and feels isolated, frustrated and rudderless without his parents in his life, but is too proud to make up with them. In this turmoil, Pei makes contact with Prithvi and helps promote Ramesh’s blog online while understanding more about why the family broke up.
Pei’s attempts to get Akash to reconcile with his parents are stonewalled by his bruised ego and Prithvi’s attempts to get his parents to make peace with Akash only finds them being obstinate. When Pei becomes pregnant with the family’s first grandchild, she resolves to find a way to reunite the family so that her child enters the world in a healed family environment where there is peaceful co-existence. With Akash unwilling to budge and Prithvi unwilling to interfere beyond a point, she looks for an able ally to help devise and execute her master plan to reunite this family.
Set against the backdrop of post liberalization India, Tattvam is the saga of a family that evolves over time to rediscover its essence as a connected being.