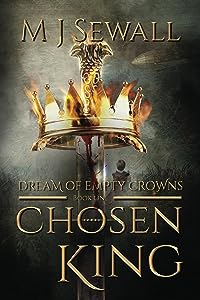 A new leader...In need of a new king, the choosing tower fills with names, and Gordon is relieved he has no chance at the crown. He hopes his sweetblood illness takes him out of the running--making it all the more shocking when he's chosen. The beginning of a nightmare that forces Gordon to flee his own kingdom.A new enemy...In Gordon's new world of danger and betrayal, true authority over the kingdom lies with one whose pursuit of absolute power stretches beyond his own borders. Someone intent on wresting control from the new boy king by any means.A new courage...Pursued by the airships, and the very soldiers sworn to protect him, forced to align with great warriors and face even greater enemies, Gordon's fate lies in finding strength enough to save not only his land...but the entire world.