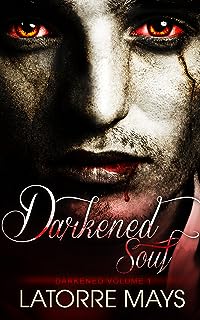 Passion can make a person do some dark things. It can even tear a relationship apart. That is the lesson that Daniel Westberg, a Nosferatu, learns in Darkened Soul, a futuristic vampire thriller that combines dark fantasy and horror with sci-fi trappings. The year is 3053. The United States has become a series of futuristic city-states. Daniel and his companion Jared head to California for a little fun. California is not what it seems however. In California, Daniel encounters a face from his past…a face thought long dead and that makes him question everything, including his rock-solid relationship with Jared. Also, Daniel learns of Ursula, a woman with an agenda that will send Daniel to Europe and dreams of his past there. From London to 2048 Paris to California again, Ursula’s agenda reveals an ancient prophecy and pits Daniel against Jared and the truth of their existence.Then in the bonus story 'Plans Within Plans'...when the Nosferatu Ebony is visited by the Nosferatu Nicholas, she assumes he wants to resume their 'will-they/won't-they' relationship. Instead, Nicholas presents an offer that puts them in the crosshairs of Ursula. It also makes Ebony wonder...is she a player...or just a pawn in a dangerous game. A prequel tale to Darkened Soul.*'Plans Within Plans' only available in book version of Darkened Soul