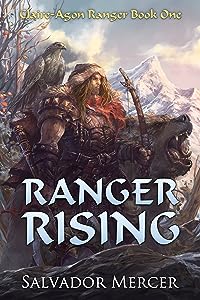 Pick up Book Two in this series, DEAD DRUID for half price this week only! (April 4-9th)A thousand years ago, on the world of Claire-Agon, a war raged between men and dragons, destroying the creatures and the land's many civilizations.When his family is enslaved, Targon Terrel must battle the sinister Kesh wizards to save them, but a desperate group of refugees from his home country of Ulatha needs his help, too.With the unexpected aid of a Druid of the Arnen, Targon discovers his destiny as a Ranger, but far from solving his problems, this discovery will soon reveal a personal betrayal. Targon's fate brings him closer to long-buried truths about the ancient war between wizards and dragons -- truths that could plunge his world into darkness forever.*****Author's Note:If you've read this far, I just want to say thank you for looking at my book and a special thanks to those of you who have purchased it. It is most gratifying and humbling to have you spend your valuable time looking at my work, and it's my sincerest hope that it brings some entertainment, to your reading pleasure.The Ranger Rising series takes place one thousand years after the Great Dragon War.Book 1, Ranger Rising: May of 2015Book 2, Dead Druid: February of 2016.Book 3, Mad Mage: June of 2016Books 4 & 5: Subscribe to my newsletter for the latest release datesThe Dragon Book Series consists of five books each highlighting one of the five chromatic dragons found in the world of Claire-Agon. Each book can be read independently of each other and in no particular order however, they take place during the same time frame and involve many of the same characters and locations of the Claire-Agon world.The Black Dragon: February of 2015The Blue Dragon: November of 2015The Green Dragon: May of 2016The Red Dragon and The White Dragon: Subscribe to my newsletter to be notified when it's released.Direct link to sign up for Salvador Mercer's newsletter: eepurl.com/benueb