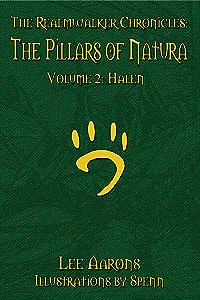 This is Volume 2 of The Realmwalker Chronicles.The Goddess Erta needs her champion: For over 3000 years, the Goddess Erta empowered a succession of mortals to champion and protect The Balance of Her world. These were the Realmwalkers. For centuries, the infinite line of these heroes remained unbroken and peace reigned. But after the last Realmwalker died, there was no Successor. For the first time since the abominable Realm Wars, those seeking control over the Four Realms were able to push for an advantage, throwing the world into growing chaos and conflict. Meanwhile, the mysterious and powerful Seraph continued their frantic and seemingly futile search for Erta’s missing guardian. Living in an isolated community of outcasts, Rennick and his twin sister Raine struggle with decisions regarding their lives and what awaits them as they leave their childhood behind. After discovering the heartbreaking truth that their past is also the key to Erta’s future, Raine learns that she is the next Realmwalker. As Raine begins the training that will prepare her to carry the burdens of a world on the brink of war, Rennick struggles with his own burden—protecting the life of the sister he loves. Feeling that even Raine’s most loyal allies may be desperate to control her, Rennick must learn to master his own powerful abilities to ensure her safety. In this new fantasy series, Lee Aarons tells the epic story of Raine and Rennick Sherrill, twins bound to the fate of their world by destiny, bound to each other by more than blood. Only when they uncover the truth about their past can they truly begin to save The Four Realms from those seeking to destroy it.