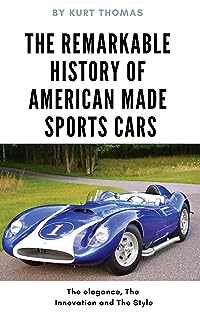 The 1950's and 60's were great pioneering years for loads of wannabe American Sports Car manufacturers. Some beautiful designs were penned and because these were the hot rod years, some seriously very fast cars were put together, most that would outrun what's out there today, sixty years later. But there were also large fortunes lost as well as marriages. But these were the best design years in the USA for automotive. So read the underlying history of the Kurtis, Scarab, Cheetah, Corvette, Bocar, Chaparral, Cunningham, Griffith, Omega, Pantera AC Cobra and ride along in the early Shelby Mustangs and Corvettes along with many many more hopeful designers as they got their sports car creations in front of the US public. Read about the rich 'Wacky' Arnolt who was behind the Arnolt-Bristol and the Woolworths heiress, Barbara Hutton son Lance Reventlow who built the quite stunning and extremely successful Scarab. And Bill Devon of Devon SS fame but not fortune.
There's 65 color photos in here, some period and 146 pages of content. Discover how Carroll Shelby had Ford in his pocket, even without any money, or, how the journalist Bill Carroll gently persuaded his friend Ian Garrad, the Californian distributor of the tiny asthmatic Sunbeam Alpine to go get Carroll Shelby to drop a 289 cu inch Ford V8 where once had been 4 cylinders and see it become such a seller that he couldn't get enough of them. Who was behind the Kaiser- Darrin? The Edwards America? These guys were all innovative and creative. Living in an America that had a thirst for all things fast.