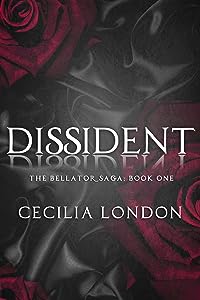 She once was important. Now she’s considered dangerous.

In a new America where almost no one can be trusted, Caroline lies unconscious in a government hospital as others decide her fate. She is a political dissident, wanted for questioning by a brutal regime that has come to power in a shockingly easy way. As she recovers from her injuries, all she has are her memories. And once she wakes up, they may not matter anymore.

Dissident is a blend of romantic suspense, contemporary romance, political thriller, and speculative fiction. Told mostly in flashback, it details the budding romantic relationship between our heroine, Caroline, and Jack, the silver fox playboy who tries to win her heart.

Part One of a Six Part Series. Each part is a full length novel between 60,000-120,000 words and ends in a cliffhanger. For readers 18+. This saga contains adult situations, including non-gratuitous violence, explicit (consensual) sex, psychological and physical trauma, and an oftentimes dark and gritty plot (particularly in part two).

"With equal parts political thriller and captivating romance, Cecilia London has crafted a novel that's hard to put down and kept me wanting more! I'm looking forward to the next book in the series!" - Melissa Brown, Author of Wife Number Seven

"Behind all the information about elections and scandals is a beautiful love story that touched my heart. I fell in love with Caroline and think that Jack is one sexy man!" - Carol, StarAngels' Reviews

"Cecilia London has one powerful and chaotic series breaking out of the gates at full speed! Is it a political suspense novel? Romantic suspense? Dystopian political romantic suspense? All I know is this is one riveting tale that packs a wallop....At no point could I see where this would end up and I must say, the ride to the finish and balancing on the edge of this cliff hanger is well worth the ticket to ride!" - Dianne, TomeTender