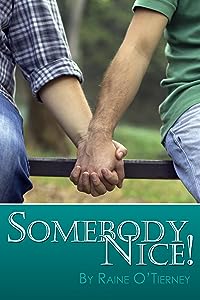 Milo and Danny's relationship is just starting to heat up, but Milo's not quite ready to be introduced as "the boyfriend" to Danny's adopted daughter, Melissa. So what happens when precocious Melissa takes it upon herself to find Danny a girlfriend and enlists the help of her school librarian, Milo, along the way? An adorable story about family and romance.

This is Danny, he is a very nice person and he is very funny, but I think he is lonely. He helped me when my mom wanted to sell me to a reality show and now I live with him and I wanted to do something back for him so I want to find someone for him, because he has only me and Bunny, that’s his dog, who is really big. And I’m 7 years old and Danny is 35, which is really old, but that doesn’t matter he looks younger. Miss Portwood, my teacher said I need to say what Danny likes to do and he likes to walk with Bunny and work out and play football with me and Bunny and he works also, I think he is a police officer or something, he has a really cool car! And he has a ring in his nipple, which I think is really ouch, but he says people like it. I don’t understand why but Danny says I need to be older but I’m already 7.

Photo Description:
A man stares at the camera, a hint of a smirk on his lips. His stubble-covered chin is tilted slightly down, and he has intense brown eyes. His black, gray, and white checkered shirt is open revealing his collarbone and a bit of chest. He wears a fisherman’s cap, hiding his hair. Only his ears peek out. Freckles cover his brow, cheeks, and chest. There’s an old scar on his left cheek.

This story was written as a part of the M/M Romance Group's "Love’s Landscapes" event. Group members were asked to write a story prompt inspired by a photo of their choice. Authors of the group selected a photo and prompt that spoke to them and wrote a short story.