The Kingbird: A Coalition Rebellion Short 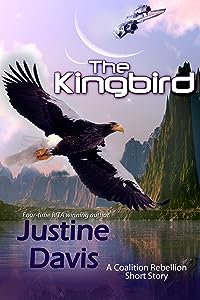 A Coalition Rebellion Short StoryWhat was hidden is now found.It has been a decade since King Dare and the flashbow warrior Dax reunited to protect their world. The Coalition has been driven out, but they have never given up on regaining the jewel that is Trios, and the battle is ongoing. The constant threat of the Coalition is a heavy load to carry, but it is made easier for King Dare and Dax by the presence of their mates, Queen Shaylah and Califa, and brightened immeasurably by their children, Lyon and Shaina.At the urging of the queen, the families steal one single day away from the pressure, a day of rest spent at one of the few pristine spots left on their beloved planet, a place full of Dare's family history--a place where they find hope in a treasure thought lost forever, and their children unexpectedly discover what could well be the miracle to keep Trios safe. Author of more than sixty books (she sold her first ten in less than two years), Justine Dare Davis is a four-time winner of the coveted RWA RITA Award, and has been inducted into the RWA Hall of Fame. Her books have appeared on national best-seller lists, including USA Today. She has been featured on CNN, taught at several national and international conferences, and at the UCLA writer's program.Find out more at her website and blog at justinedavis.com, Facebook at JustineDareDavis, or Twitter @Justine_D_Davis.