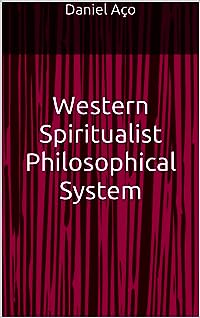 Daniel Aço is a Brazilian spiritualist thinker and writer. He was born in 1976 and lives in Porto Alegre.

During a long time, the author defined himself as a free thinker. Today, not giving up such solid definition destined to good Western thinkers, the author prefers to be a thinker with freedom.

In English language, Daniel Aço means Daniel Steel. The Providence wanted that a man with the steel strength was able to expose the truths said in this book, which, in its first month, deserved a translation into Spanish and into English.

This book is about a unique work, because it involves a combination and a critic interpretation about the Western Philosophy at light of the spiritual scholars and the spirituality in general. Daniel Aço is the first to do it, and does it with the mastery owned by him, fighting for the philosophical freedom of the goodwill humans, before the presumptuous academic world and the famous philosophical systems.

This work must mean to Philosophy and Spirituality the same that "Chariots of the Gods?” by Erich von Däniken, means to Ufology. As Däniken, Daniel Aço undertook in this book, without abandoning the past, a solid metaphysical index for the spiritual studies in the centuries to come. As Däniken, Daniel Aço will also be, eventually, misunderstood and mocked. However, his seed was already planted. And his light, projected.

However the author says that he doesn't mind if his work is original, or if it will sell two or twenty million copies, the work is innovative, even because exposes the alleged superiority of the Western philosophers and inserts the Spiritist Doctrine in the Western knowledge.

Its language is literary and there is a little bit of everything in its pages: literature, religion, psychology, metaphysics, moral, spirituality, philosophy, politics, sociology, ufology, science, causality, relativity, energy, mediumship, freedom, karma, reincarnation, satire, and much more. Finally, being a little biographic, the book can be a self-help book, for the person who reads it.

Nobody finishes reading this book as an untouchable being, not even its antagonists. Regarding them, by the way, the author doesn't really care – also because he will sell, alone, more copies than all these antagonists together.